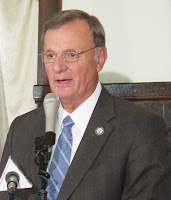 Senator Ben Nevers, the Bogalusa Democrat who chairs the Senate Education Committee, took a brave stand at the Baton Rouge Press Club meeting on Monday, saying that the state must find more money for education or else “the dismantling of education will be the coffin that we bury Louisiana in for decades to come.”

Sen. Nevers suggested a temporary reinstatement of the Stelly plan, which would raise income taxes on the highest earners in the state, and taking a look at the billions of dollars in tax breaks and loopholes that the state offers to big business.

LFT President Steve Monaghan, who joined Sen. Nevers at the luncheon, said “The senator is taking a brave and principled stand. While some are saying that we must make do with less, Sen. Nevers understands the long-term harm that more cuts to education will cause our state.”

Read the full story here.
Posted by Louisana Federation of Teachers at 9:17 AM