Baton Rouge – November 18, 2010) A new coalition of concerned organizations today urged Governor Bobby Jindal and the legislature to take a balanced approach to meeting Louisiana’s short-term and long-term needs, rather than continuing a cuts-only strategy that will cost jobs and hurt the economy.

The Better Choices for a Better Louisiana coalition comprises a growing number of business, faith, labor, health, education, community, and consumer groups throughout the state that favor a balanced approach that includes revenue to maintain crucial services and invest in Louisiana’s future.

At a press conference prior to tomorrow’s meeting of the Joint Legislative Committee on the Budget, Coalition members said the cuts-only approach that Louisiana’s elected officials have taken to the economic crisis is seriously compromising services that Louisianans rely on, and is leading toward a decline in the state’s quality of life. That in turn hurts state efforts to attract new industry and residents.

To read more, please click here.
Posted by Louisana Federation of Teachers at 1:19 PM No comments:

Tell Gov. Jindal that you are outraged at the EduJobs fund diversion!

Gov. Jindal has decided to divert $147 million from the purpose Congress intended: saving the jobs of teachers and school employees.

Instead, the governor wants to use half of the money for higher education, and half to plug next year’s general fund budget hole.

It is shameful that the governor is pitting education communities against each other, instead of adequately funding all of education, from kindergarten through college.

Please click here to tell Gov. Jindal that you expect him to make better choices for the people of Louisiana!

(On the Action Center page, just enter your ZIP code to access the message to Gov. Jindal. If you live outside of Louisiana, please enter the ZIP code for your school district or another valid Louisiana ZIP code.)
Posted by Louisana Federation of Teachers at 2:01 PM No comments:

A decision by the Jindal administration to redirect $147 million in federal education funds is the latest outrageous example of failure to make reasonable, responsible choices on behalf of the people of the state, Louisiana Federation of Teachers President Steve Monaghan said today.


On Thursday, district school superintendents were notified that they will not receive money allocated by the U.S. Congress in order to preserve the jobs of teachers and school employees in elementary and secondary schools. Instead, according to Jindal’s commissioner of administration, some of the money will be used to shore up funding for state colleges and universities, and some saved to plug next year’s anticipated budget hole.


“School districts around the state have based their budgets on the promise of this funding,” Monaghan said. “This action will cause real pain and loss in every school district in Louisiana.”


When Congress passed the EduJobs act, guidelines required states to spend the funds on salaries and benefits for teachers, school administrators, and other essential staff. The money was to be distributed to school districts according to the Minimum Foundation Program formula, which allocates state education funds.


“It is already shameful that we were forced to rely on Congress to save the jobs of critical teachers and school employees,” said Monaghan. “But for the governor to pull the rug out from under our schools at this late date is unbelievable.


By diverting funds dedicated to elementary and secondary education to colleges and universities, Monaghan said, the governor is unfairly pitting education communities against each other.


“The governor should be making sure that there is enough money to fund education appropriately at all levels,” Monaghan said. “Instead, he is forcing us to fight over crumbs from an ever-shrinking pie.”


To read more, please click here.
Posted by Louisana Federation of Teachers at 12:55 PM No comments: 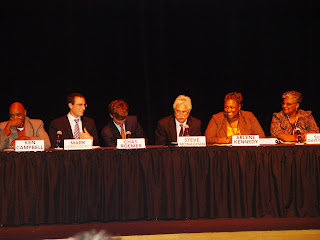 LFT President Steve Monaghan participates in a panel discussion of "The Lottery."
Yet another documentary film promoting charter schools over traditional public education was screened in Baton Rouge Thursday. LFT President Steve Monaghan sat on a panel of educators who discussed "The Lottery" after the showing.
Like another new entry into the genre, "Waiting for Superman," this movie takes liberties with the facts, exaggerating the success of charter schools and ignoring the great strides made by many public schools.

Advocate reporter Will Sentell attended the screening for this report.
Posted by Louisana Federation of Teachers at 9:45 AM No comments: