Malcolm Forbes named his yacht "Capitalist Tool," so the last place you'd expect to find an article supporting teacher unions and questioning the validity of market-based "education reform" is the Web site that bears his name.

Yet here it is. Writer E.D. Cain opens with this riff on conventional right wing wisdom: "Teachers' unions are often portrayed by their opponents as standing in the way of efforts to reform our schools. Maybe this isn't such a bad thing."

Cain acknowledges that attacks on teacher unions and support for privatized reform come from both the left and right wings of the ideological spectrum. Both sides, he says, have fallen for a neoliberal scheme to disempower teachers and their unions while funneling vast amounts of public money into private coffers.

About reforms, he says "Vouchers have been met not only with public disappointment, but with few if any real benefits. Most charters haven't fared much better. And for-profit schools come packaged with all sorts of other troubling implications for our public - or should I say "public" - education system."

About the horde of non-educator experts who devise schemes like high-stakes testing "which seeks....to boil down education to learning by rote," he writes, "When technocrats and businessmen take over the hard work of designing a system of education is it surprising that the result of a complex labyrinth of testing schemes aimed at only those subjects that can be measured, quantified and pasted into spreadsheets? Is it any winder that professionals who care about education might see this as a threat?"

And about the unions which defend professional educators, he writes, "I support teachers' unions because they are the best chance this country has to improve and strengthen public education for the long haul. No other organization will step in to protect teachers from political blowback and the reform-trend-of-the-moment."

It's a good read, with important ideas, from an unexpected source.
Posted by Louisana Federation of Teachers at 8:21 PM No comments:

Between now and October 1, read something that someone else will find offensive. It's important.
Posted by Louisana Federation of Teachers at 7:53 AM No comments: 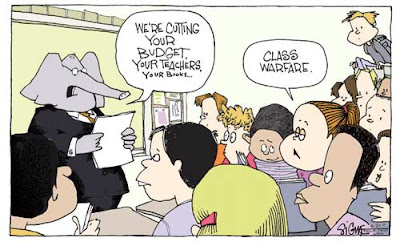 (thanks to Bartcop)
Posted by Louisana Federation of Teachers at 8:27 AM No comments:

For over 70 years the Avondale Shipyard has been an economic engine for New Orleans, the West Bank and the entire Gulf Coast. Avondale was, and still is, central to the area’s economic, cultural, social and political life.

Avondale was once one of many industrial enterprises in the New Orleans region that created well-paid jobs and prosperous and stable communities. Now it stands virtually alone, and even that may soon change. The very existence of Avondale is being debated in corporate boardrooms and Congressional hearings, in newspaper columns and the corridors of the Pentagon.

Avondale Shipyards is owned by Northrop Grumman, which plans to close the shipyard next year.

Nearly 5,000 Avondale workers stand to lose their jobs. That will cause the loss of 7,000 additional jobs in the region, according to Louisiana Secretary of Economic Development Stephen Moret. Avondale pumps literally billions into the local economy. It is Louisiana’s largest private employer. It is a central pillar of the New Orleans regional economy.

According to reports, Avondale is not losing money, but Northrop Grumman figures it can make more money by closing the shipyard, sacrificing thousands of jobs and sending a shock wave through the local economy.

On Saturday, October 1, Avondale Shipyard workers, elected officials, labor, business and faith leaders and members of the New Orleans-West Bank community will sponsor a march and rally to Save Our Shipyard. Participants will assemble at 10:00 A.M at the Superdome on Poydras Street in New Orleans, and start marching at 10:30 A.M. down Poydras Street to the Federal Building, at 500 Poydras.

A crucial year for BESE elections

Races for the Board of Elementary and Secondary Education generally bring few thrills to a campaign season. The board that develops education policy is not exactly sexy, and its issues are hard to distill into eight-second sound bites.

Members of BESE get no pay, and membership on the board is not considered a steppingstone to higher office.

But for several reasons, BESE races have made it to the media radar screens this year.

For one, the news media are looking for some excitement, and there is very little of that in most races this year. No major candidates oppose Gov. Bobby Jindal at the top of the election ballot, there’s little controversy emerging in the other statewide races, and dozens of senators and representatives are returning to office without opposition.

But it’s not just the media ginning up expectations for bloody confrontations in BESE races this year. With little competition in other races, campaign contributors are looking to races that usually don’t garner much attention.

Contributors with the big money come with agendas, and they’re not necessarily pro-public education. As we’ve documented in EdLog before, some of the money people want to abolish due process rights for teachers.

Others may have an eye on the state’s education budget. As Deep Throat told Woodward and Bernstein, “follow the money.” For example, unknown to most citizens, the State Department of Education hands out half a billion dollars in private contracts every year, for everything from professional development workshops to writing and scoring standardized tests.

And there is money to be made in the charter school movement. State law prohibits for-profit agencies from holding school charters. But it’s perfectly legal, and standard operating procedure, for a non-profit to be granted a charter, and then sub-contract school operations to a private provider.

That little subterfuge has created a huge, nationwide industry. Several multi-state corporations operate hundreds of charter schools and collect billions of dollars in public funds. They hire lobbyists and create PACs to elect candidates who will make it easier for them to expand their operations.

All of which leads to news reports like this one from the Times-Picayune’s Andrew Vanacore, who writes, “Once relatively obscure, BESE has drawn close attention as the debate over education reform has shifted into a higher gear and grown ever more polarized on issues such as charter schools, tenure for teachers and the role of local school boards.”

Or this story from Advocate reporter Will Sentell, who observes that “The winners will decide key policies for the next four years, including whether Gov. Bobby Jindal gets his choice for state superintendent of education.”

More than in any previous BESE election, serious issues are at stake this year. Among them are teacher tenure, privatization of public services, funding for public education and the state seizure of local public schools. LFT will provide information about these issues in the coming weeks. Before you vote, be sure to ask candidates where they stand. Support those who want strong, accountable public schools under local control and who believe that teaching is a vital, honorable profession that deserves respect and dignity.
Posted by Louisana Federation of Teachers at 8:40 AM No comments:

Email ThisBlogThis!Share to TwitterShare to FacebookShare to Pinterest
Labels: BESE

Does privatization save the taxpayers' money?

The biggest justification for selling the jobs of public employees to private corporations is that it will save money for the taxpayers. From school custodians to health insurance professionals, the story is that corporations can somehow hire employees for important public services and still make money for their shareholders.

The obvious ways to accomplish this feat are by reducing the salaries and benefits of the employees, and by shortcutting the public on the services for which the corporations are being paid.

Then there are the inevitable cost increases when time comes to renew the contract.

Even so, many people are willing to go with privatization because they are convinced that it does save money.

Now comes this report in the New York Times about a new study showing "that the government actually pays more when it farms out work."

That's right. As reporter Ron Nixon puts it, "The study found that in 33 of 35 occupations, the government actually paid billions of dollars more to hire contractors than it would have cost government employees to perform comparable services."

The study, produced by the non-partisan Project on Government Oversight, focuses on contracts issued by the U.S. government. Today, though, an article appeared on POGO's Web site saying that states are overpaying for privatization as well.

In the article, Dana Liebelson wrote, "state governments faced with budget pressure are making mistakes similar to the federal government, privatizing and contracting for services on a large scale without determining whether the decisions make fiscal sense."
Posted by Louisana Federation of Teachers at 8:43 AM No comments:

Email ThisBlogThis!Share to TwitterShare to FacebookShare to Pinterest
Labels: privatization

The nation has just celebrated Labor Day, yet few Americans have any idea why. A new report on how the history of labor is treated in high school history textbooks offers an explanation—most Americans never got any education about the labor movement's proper place in our country's history and its many contributions to the nation's development.

"American Labor and U.S. History Textbooks: How Labor's Story Is Distorted in High School History Textbooks," sponsored by the Albert Shanker Institute, in cooperation with the American Labor Studies Center, surveys four major textbooks that together account for most of the market in U.S. history textbooks. The report notes that these textbooks often present labor history in a biased, negative way; for example, focusing on strikes and strike violence while giving little or no attention to the employer abuse and violence that were usually at the root of such actions. Their persistent focus on conflict overrides any attention to labor's central historical role in bringing generations of Americans into the middle class.

To read the rest of this story, please click here.
Posted by Louisana Federation of Teachers at 1:20 PM No comments:

Labor Day message: Get out and vote!

Here's an appropriate Labor Day message, courtesy of News-Star reporter Barbara Leader: build coalitions and fight for a better future!
Posted by Louisana Federation of Teachers at 9:39 AM No comments: 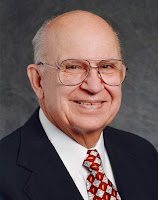 Services will be held on Friday, September 9, for longtime AFL-CIO President Victor Bussie, who passed away in his sleep on Sunday, September 4.

“In his 41 years as president of the Louisiana AFL-CIO, ‘Mr. Vic’ championed public education and was an unflinching advocate for children and the men and women who work on their behalf,” said LFT President Steve Monaghan.
Louis Reine, current president of the Louisiana AFL-CIO, said that Bussie was a tireless advocate for working people.
To read the rest of this story, please click here.
Posted by Louisana Federation of Teachers at 7:59 PM No comments: